Since the beginning of the project “Modern Ethnic Design Center”, a vocational training center teaching local Cambodian designers and dressmakers about collection & design development and sustainability, each year, the course concluded with a fashion show showcasing the designs and collections of 10 to 12 Cambodian designers.

The event’s newest addition, that will continue for the next years, was the “Bazaar Phnom Penh” which took place immediately after the show. All of the designers were able to sell their collections straight from the runway and in addition to that, they also received the opportunity to sell other handmade, Fair Trade, design products which they have created.

The five designers who will go to the Bazaar Berlin in November have been selected at the end of the show by a jury consisting of the project’s partners including Mrs. Barbara Mabrook from Bazaar Berlin, Mrs. Inna Thomas and Mr. Harald Thomas from the Fashion Design Institut in Germany, Mr. Ozan Oezdemir  of suPPPort ltd. and the MEDC‘s Head Ms. Hilary Hoffmann.

In the name of everyone at suPPPort ltd., we would like to congratulate Nim Douch, Sovannara Sok, Sovann Rachana Seng, Sina Peang and San Sor for being chosen as the designers who will join the current Head of the MEDC, Hilary Hoffmann, to go the trade fair in November.

Everyone, each of the 12 designers, did a great job and worked hard on their collections and continued to improve their work throughout the last few months.

As every year, the German Embassy in Phnom Penh was a big supporter of the event and of the training course previous to the show, and used their social media channels to advertise and raise awareness for the cause and its local Cambodian designers.

This year, due to high demand, the event took place at the Penh House & Jungle Addition Hotel who sponsored the venue and has been very supportive throughout the event’s preperations. The MEDC hopes to continue cooperating with them in the future. 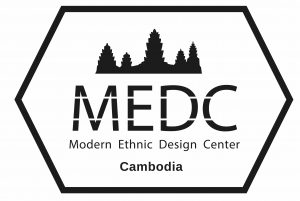